In 1973 the British Film Institute (BFI) filmed a documentary about North Kensington Law Centre, ‘A pioneering law centre with a radical agenda: ‘bringing law to the people’ in the early 1970s’.

The video can be viewed on the BFI website.

The Centre dealt with primarily housing problems ranging, from rent tribunal cases, notices to quit, illegal evictions and landlord and tenant disputes. Many people in the area were victims of slum landlords including the notorious Nicholas van Hoogstraten who radiated fear among many of his tenants and whose properties were the subject of several compulsory purchase orders by the Royal Borough of Kensington and Chelsea. North Kensington Law Centre brought one of the first private prosecutions of a landlord for harassment.

A distinctive feature of the Law Centre’s work was the development of 24 hour, emergency representation particularly for people in detained in police custody. It successfully defended local youths charged with causing grievous bodily harm to police officers after a raid on a youth club. This pioneering practice has now become a recognised part of the criminal justice system following the Police and Criminal Evidence Act (PACE) 1984. PACE introduced the duty solicitor scheme in police stations in 1986. The Law Centre was also central in the campaign for employment rights that brought about recourse to tribunals.

In 1975 the Lord Chancellor Lord Elwyn-Jones agreed that government funding should be given to a number of Law Centres in financial difficulties including North Kensington. Grant funding for eight centres continued until 2002 when the Legal Services Commission converted these grants into contracts.

Recent reforms to the legal aid system have prompted discussion on what is special about Law Centres. Michael Zander QC, emeritus professor of law at the LSE saw the movement as the beginning of a complete alternative to the provision of legal services to the poor. In 1978, he wrote, ‘Nothing less than the introduction of a new public service to operate alongside, and in supplement to, the private profession would suffice to deal adequately with the problem of providing proper legal services to a section of the public who went short of them’. A movement ahead of its time, it preceded the principles of the Access to Justice Act introduced by the New Labour government in 1999. Inspired by President Johnson’s war on poverty in the United States, Zander saw the US neighbourhood law clinics as a model for the Law Centre movement in the United Kingdom. Zander wrote: ‘There was a feeling at the time that this was to be a different type of legal service offered to the public in neighbourhoods, involving being open in the evenings with outreach work and education work’.

In 1979 Royal Commission on Legal Services announced that: ‘Law Centres are, and should be, here to stay 979 and are making a vital contribution to legal services.’

Housing reform was a dominant theme of the decade. Concern about the poor conditions of accommodation in the private rented sector were highlighted after a fire at Clanricarde Gardens just off Notting Hill Gate in December 1981 killed eight people and left over a hundred people homeless, mainly migrant workers from Columbia, who worked in the local hotel and catering trade. Following this tragedy NKLC became the first Law Centre to represent survivors and their families at the inquest and later campaigned for improved regulation of health and safety standards for houses in multiple occupation. In 1989 a total of £35,000 compensation was awarded to 12 survivors of the tragedy, which was found to be due to inadequate safety measures. In the same year the Law Centre published its report, Behind the Facade outlining the housing need of migrant workers.

NKLC successfully represented Martin Ward and his family in the High Court to prevent the closure of the Westway Travellers site under the A40 by Hammersmith and Fulham Council. Following a ruling by Mr Justice Woolf in the Divisional Court quashing the decision to attempt to close the only official travellers site in West London, the case helped to clarify the law on the duties of Councils under the Caravan Sites Act 1968 to provide accommodation until an alternative site could be found and considerably strengthened the powers of individual travellers to protect their rights to live on Caravan sites around the country.

In 1985 the Law Centre acted for tenants of the Lancaster West estate following complaints against the Council relating cockroach infestation. Following a complaint to the Council it obtained a court ruling in October 1985 that the cockroaches were ‘dangerous to health, extremely unpleasant and distressing’ and found the Council liable for failing to carry out the eradication with due care and attention. This precipitated a series of claims for compensation by residents helped by the local Housing Action Centre.

The name Nicholas van Hoogstraten became notorious during this period for his threats on tenants and violation of health and safety legislation. The Law Centre and the local authority worked together to tackle the growing problem of harassment by unscrupulous landlords. In 1987 the council served compulsory orders on seven properties owned by Van Hoogstraten. Further reforms threatening the rights of tenants followed the Housing Act 1988 which introduced the deregulation of private sector tenancies and made it easier for landlords to obtain possession.

In 1988 the Legal Aid Act was introduced that transferred the grant funding powers of the Lord Chancellor to the Legal Aid Board. This paved the way for funding of advice services working in social welfare law through the introduction of contracts and means testing to assess financial eligibility. 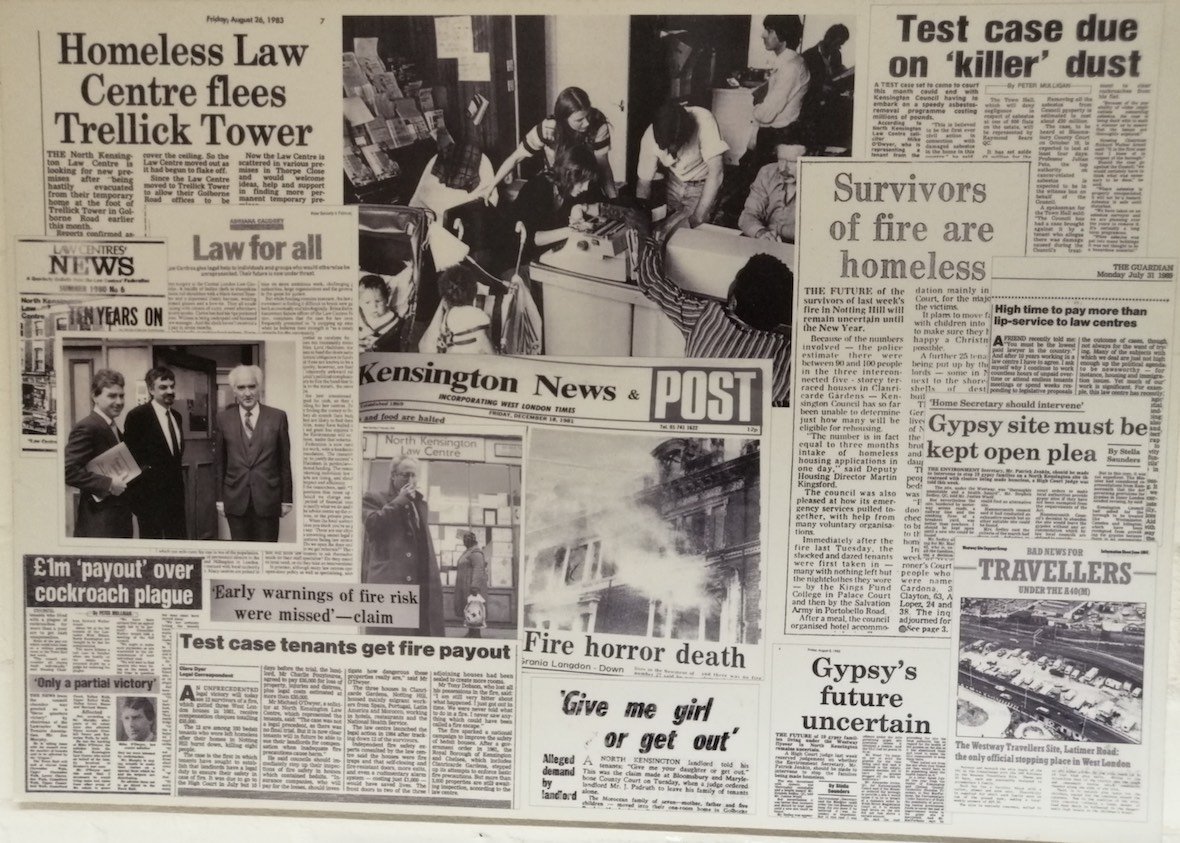 The 1990’s began with one of the most radical changes of the organisation after it decided to abandon the collective staff structure. Following a review the Centre embarked upon a new business model employing a Director and Senior Solicitor accountable to the Management Committee.
Changes in the funding of legal advice began to take place in local government as local authorities moved from grant aid to service level agreements (SLAs). The pace of reform through privatisation extended to local government with the introduction of compulsory (CCT) for council funded services.

In 1992 Getting to Know Your Rights: a guide for all as published by NKLC outlining police powers following the 1984 Police and Criminal Evidence Act. During this period the Law Centre was very active in supporting the Westway Travellers to pursue complaints against the local authorities of Hammersmith and Fulham and Kensington and Chelsea to the Commission for Racial Equality for their future to provide alternative site accommodation. NKLC represented people fleeing persecution and war in Bosnia, Ethiopia, Somalia, Sudan, and Latin America.

In 1995 the Law Centre decided to end its pioneering 24 hour emergency service introduced in 1970 for people detained in police custody, a decade after PACE set up the national free 24 hour solicitors service at police stations now carried out by private practice.

In 1996 the Law Centre represented Mr Vitale, an Italian national who came to the United Kingdom in search of work, in a leading case concerning the exercise of freedom of movement and treaty rights under the Maastricht Treaty. The case was sent to the Court of Appeal, which adopted a narrow interpretation of treaty rights relating to freedom of movement and rights of residence.

In 1977, following the election of New Labour, the Access to Justice Act 1999 was introduced, which created the Community Legal Service and the Criminal Defence Service and replaced the Legal Aid Board with the Legal Services Commission. 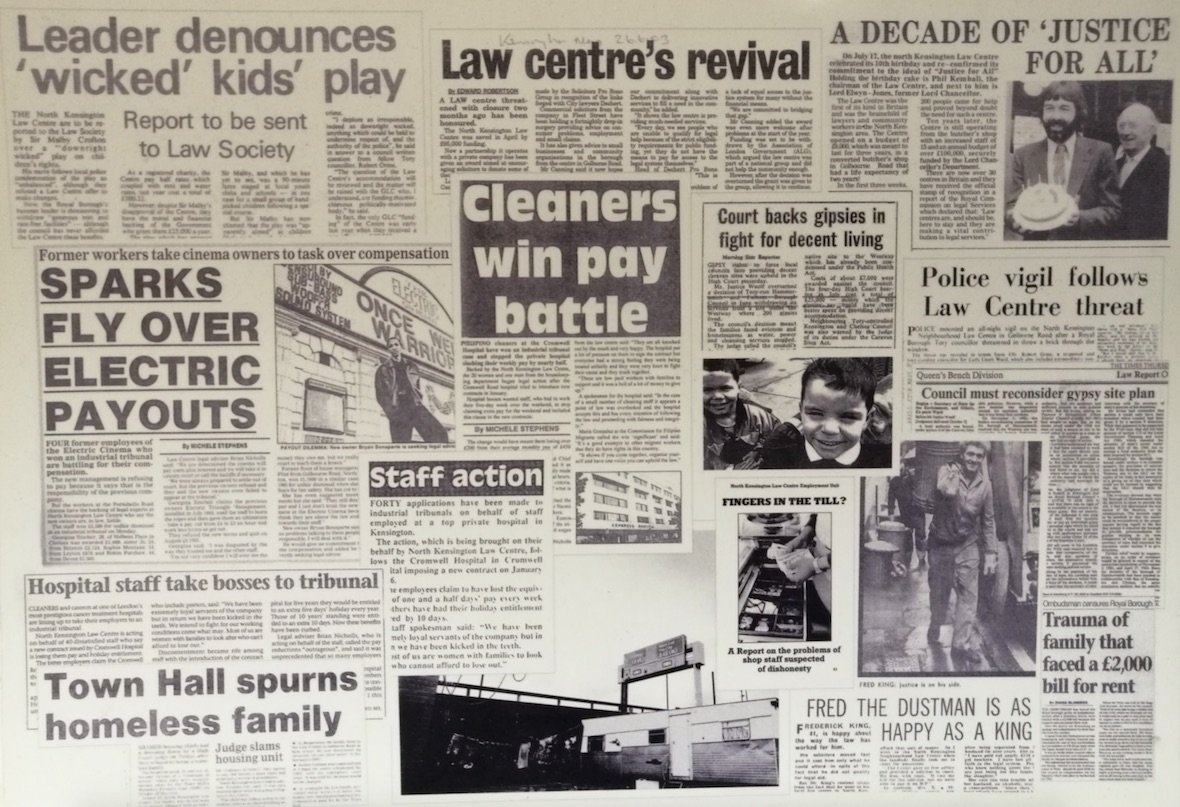 The CLS provided opportunities for the Law Centre to expand its areas of work. Funding was extended to cover advice and assistance across all of social welfare law including debt, education, employment housing and welfare benefits. Representation extended to covering immigration tribunal appeals.

In 2004 the Department of Constitutional Affairs published its first review of the Community Legal Service. Expressing concern about the lack of adequate funding for employment cases. It stated:

‘It is not acceptable that in employment cases employees can be forced to represent themselves in circumstances where private employers are able to employ lawyers to represent them. If proceedings are to be fair, there needs to be equality of arms… Legal aid should not automatically be excluded from such tribunal hearings …’ (House of Commons Constitutional Affairs Committee, Civil Legal Aid: adequacy of provision, July 2004)

Changes in the planning and funding of legal advice services were a perennial feature of the decade. The New Labour government sought to impose and extend market-driven reform across all areas of public service delivery and legal aid was not immune from these developments. In 2006 the government published its proposals for reform of the legal aid system in Lord Carter’s review, ‘Legal Aid: A market-driven approach to reform’. The report recommended the introduction of fixed and graduated fees and the commissioning of legal aid services based on best value competitive tendering. The reforms provoked a wave of protests across the sector and led to a series of campaigns at national ,and local level by Law Centres, advice agencies, the Law Society and the Legal Aid Practitioners Group. The pace of legal aid reforms attracted widespread criticism. In October 2007 the LSC introduced fixed fees. Concerns in Parliament among MPs about the impact of the changes and the threats they posed to access to justice lead to the establishment of the All Parliamentary Group on Legal Aid (APPG) in July 2009.

In 2009 the employment and immigration units launched a new initiative with Kalayaan (Justice for Migrant Workers) to provide employment advice and representation to migrant workers and victims of human trafficking who have been forced into domestic servitude. These workers have suffered appalling physical and sexual violence from their employers and are often paid less than the minimum wage. The project has attracted widespread support from leading barristers in Cloisters, 11 KBW, Matrix, 39 Essex Street and others who have provided their time and expertise on a pro bono basis.

The concept of Law Centres